Film-maker Yannick Coutheron followed Jean Girel for four years to film an extraordinary documentary on the man who is considered today as the greatest contemporary French ceramist.

For the past 40 years, Jean Girel has been on a passionate journey, an exceptional human and artistic adventure: to rediscover the technique, which had been lost since the Jian potters of the Song Dynasty (10th-13th century), of the Yohen Tenmoku tea bowls, whose outside glaze takes on astounding iridescent hues, while inside, a galaxy of round and oval patterns evokes ‘a starry night sparkling in the sky.’ There are four such bowls left in the world – three pristine bowls in Japan, where there are considered to be ‘national treasures’, and a broken one in China.

Through Yannick Coutheron’s lens, we discover the daily life of the master potter, at his home in the Burgundy countryside, where connoisseurs will recognise the misty plains, rolling green hills and fiery mountain sunsets of the ‘Discus landscapes’ and ‘Seal landscapes’ series of ceramics. The film-maker gives us a rare insight into Jean Girel’s atelier, his tests and experimentations, the fortuitous result offered by each firing.

“Like [cellist] Pablo Casals, who for 24 years started his day by practising Bach’s cello suites, for 40 years I have put thousands of Jian ware bowls into the kiln, waiting for the miracle of the birth – on the iridescent outside glaze – of these constellations that make me dream so much. And this ritual still has the simplicity of Bach’s cello suites: earth gathered at my feet, a glaze from the rocks and ashes of my immediate landscape, and the wood-baking in the kiln that I built especially.”– Jean Girel. 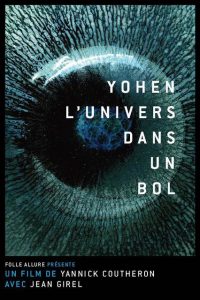 We follow Jean Girel with emotion during his trip to Japan for the WONDER LAB living treasures of France exhibition, and his first encounter with the yohen bowl kept at the Seikundo Bunko art museum in Tokyo.

We were lucky to see this very moving documentary at its premiere at the Musée Guimet in Paris, but for those less fortunate, it will be shown at the closing of the International Film Festival on Artistic Crafts (FIFMA) on saturday 11 March at 14:15, at the Le Méliès de Montreuil cinema, followed by a conversation with Yannick Coutheron and Jean Girel.